Let me start with a simple, clear, obvious statement: “I’m not used to read Forbes”. Nonetheless, as usual, Mr. Internet led me here and there and in this case to Forbes (here, dated 02.03.15 [some unnecessary but irresistible pills of numerology: the product of the first two digits gives the sum of other two]).

It is at leat 3 years that on the web I spot the Hyperloop concept. Thanks to the paySpaceXpal-man Elon Musk that (the power of money…) dusted the concept off. In brief the Hyperloop is a concept for a high-speed transportation system based on reduced-pressure tubes where pressurized capsules move thanks to air compressors and linear induced motors (here the wiki explanation). What am I talking about? The strange missile here below.

The concept dates back to the 1812 when George Medhurst proposed the idea of air-powered capsules in vacuum tubes in his paper “Calculations and Remarks Tending to Prove the Practicality, Effects and Advantages of a Plan for the Rapid Conveyance of Goods and Passengers Upon An Iron Road Through a Tube of 30 Feet in Area, of the Power and Velocity of Air” (not short, but for sure well explaining title). In 2012 Elon launched his (?!) idea of hyper-fast transportation system that himself defined as a “cross between a Concorde, a railgun and an air hockey table”. Sounds a bit science fiction, but probably times are getting mature and mature (200 hundred years of tech-evolution are not enough, but a good step forward).

The idea bounced around for decades (including Mr. Goddard papers in 1910 and Mr. Heinlain in 9156 mentioning “vacutubes” in Double Star) and in 2000s Swissmetro studied the idea concluding that it was not feasible, not economically feasible. Enough easy from a technical point of view (on the paper), enough expansive to let its economical feasibility still object of debate. 6-7.5 billions dollar, the price tag declared by Musk is considered too low, 100 billions seem more realistic (!).

Forbes begins stating that “Hyperloop is real” and it is partially true. A bundle of venture capitalist, billionaire and former White House deputy put together Hyperloop, a company boding of realizing the Hyperloop concept. Actually they intend to develop before the cargo version and only after the human transportation. Besides Hyperloop it exists, with a very similar name, also the HTT (Hyperloop Transportation Technologies), a research company crowdsourced born (and now hiring about 200 eng working in exchange of stock options; that’s business!) with the same aim: develop the Hyperloop concept. Also Musk itself revealed a plan for funding a test track in Texas with scaled-down capsules, and on June the 23rd 2015 I read here that more than 700 people signed for helping Musk for building its Hyperloop prototype. 3 teams working on the concept (I mean, paid for working on this!).

For me, and the children like me, it is fascinating thinking how Hypoerloop may change the world (boats? old dinosaur. goods transportation? matter for almost-real-time delivery!). Hyperloop can go over and under lands, through the oceans and so on (for the first line proposed by Musk the tubes should go parallel to Interstate 5) and actually overcomes two of the major impediments to rapid travel: air drag and friction. I personally belive (and who cares…) that our concept of transportation system should be deeply revisited (not jut increase the car efficiency of build larger/faster planes) and actually Hyperloop sounds to me a good compromise between science fiction and future reality.

PS. Let me just point out the image below, taken from the Musk white paper, which compares the MJ (energy) for passenger along the journey Los Angeles – San Francisco. 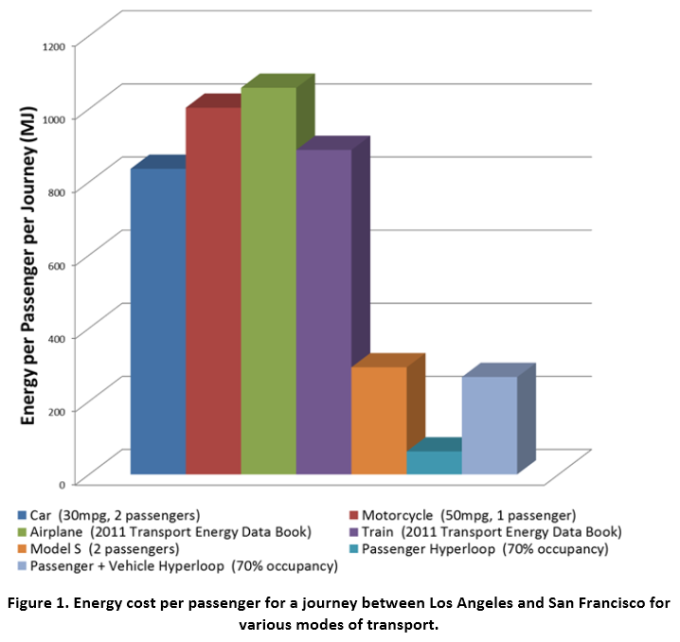 Obviously (!) the Hyperloop technology is the absolute minimum (and the same would be also comparing times), but: